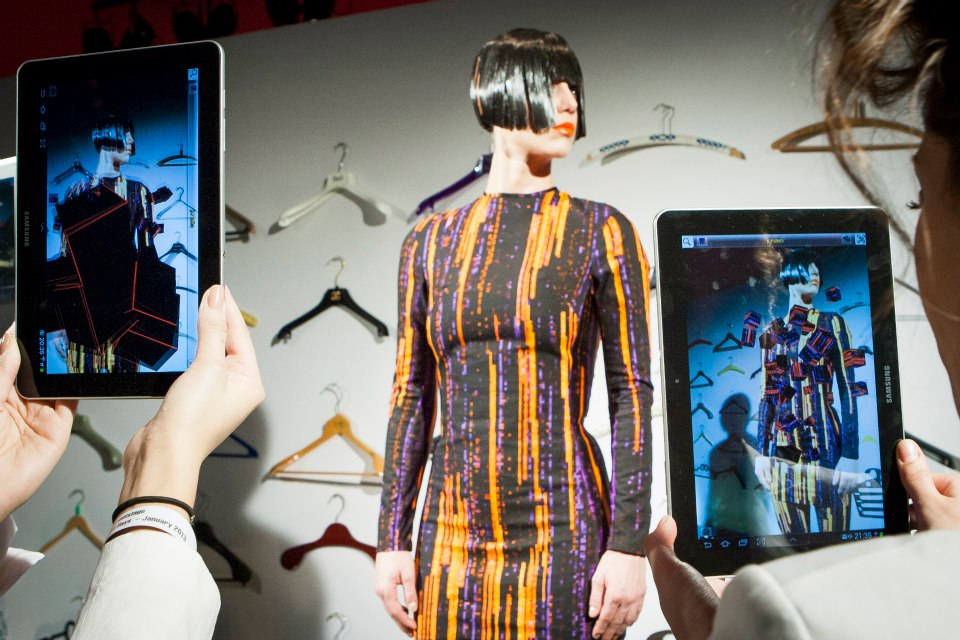 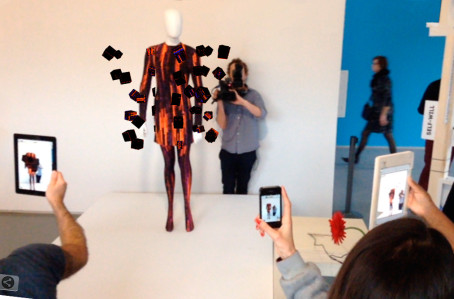 With Google Glass being worn as a fashion statement on catwalks across the world, augmented reality did have its premiere in the world of fashion. But during Amsterdam Fashion Week in januari 2013, fashion designer Marga Weimans took that development one step further, by launching the first ever full-blown augmented reality dress. Not by just printing a 2D AR marker on a piece of clothing, but by using 3D-tracking and an occlusion effect, enabling the augmented additions to weave around the wearer of the “hyperfabric” dress.

With her interdisciplinary approach to fashion (even integrating elements of architecture in her creations) Marga Weimans always had to deal with limitations related to the physical wearability of her creations. But not anymore! Her exploration of the “hyperfabric” material has brought the infinite possiblities of virtual reality into the real world. Concepts that could previously not be created “for real” (even though drawing the distinction between real and not real based on tangibility, is something of the past) can now be realised, even become pret-a-porter, because hyperfabric has the advantage of being super leightweighted, despite its expansive scale.

The hyperfabric dress is a showcase of the new possibilities opened up for fashion designers, allowing them to work with flexible designs appearing on certain ‘base creations’. Clothing that can be updated from a distance, or adapt automatically, possibly based on geo-locations or even the change of seasons. Assuming that a ‘Glass future’ is on the horizon, of course, with audiences having an eye for their semi-digital surroundings.

The augmented reality dress is the result of a cooperation between Marga Weimans and the augmented reality experts Luciano Pinna and Sander Veenhof of AR agency AugmentNL.com. The 3D scan was created using the Metaio Toolbox and a Junaio channel holding the virtual component of the dress is available to anyone lucky enough to be in the vicinity of the one-off copy of the handmade creation.

What is augmented reality and is it going to have a breakthrough like 3D printing now? Are Google glasses the future? Augmented reality is the manifestation of digital ‘material’ in our physical surroundings based on GPS-locations or visual triggers. At this moment, you need a smartphone or tablet to view it. Google Glass makes that experience more intuitive, but it’s still one step away from the real future: digitally enhanced contact lenses. Whatever the way we interact with the parallel virtual reality around us, the importance of digital information, data and visuals in our daily lives will continue to grow. I predict that “augmented reality” as a term will vanish in the future. But that’s because we won’t be able to imagine a world without the digital component.

Can you tell us more the main technical challenges behind your collaboration with Marga?

We wanted to explore the possibiltities of a true integration of virtual and real fabric, not just stitch one QR-code on a dress to let someone ‘wear’ augmented reality. Using 3D tracking technique we were able to do that. The virtual dress encapsulates the whole dress and the person wearing it. The part of the dress that appears behind the person, is truly hidden using a complicated effect called “occlusion”.

There is a lot of talk at the moment about smart textiles: in which ways will new technologies help us developing genuinely innovative and functional garments in future?

There’s going to be a fusion between fabrics, hardware and software. We know about clothing that can respond to your body condition through integrated hardware, but the software component will become more important. Soft(ware) oriented fashion can morph without limits, and the options do not have to be specified beforehand. We will see location-aware fashion that adapts to a local context through data and designs that can be altered on the go, from a distance. The genuine innovation will not only be the visible part, but it will be the rise of new bussiness models, such as subscription-based fashion or temporary trail fashion. In the future, it will not only be the ‘real’ fabric that matters.

Will we able to engineer invisible functions with new aesthetics or will more technology principles inform the design of resilient textiles in future? In which ways?

For a designer like Marga Weimans, with her fascination for the scale and power of architectural shapes, “Hyperfabric” provides an opportunity to realise concepts that were unrealistic in previous times. It leads to an extension fo the type of creations that can be worn. The merge of tangible fabric and virtual material means that gravity, weight and size become optional characteristics, only to be addressed when they are relevant to a concept. Creating a dress that is as big as the whole world? That is what happens in the last stage of the hyperfabric dress animation, as the dress expands into infinity. There’s a new aesthetic within reach. But it’s a conceptual one for the person wearing it, and for most of the audience too.